Ethereum and the entire altcoin market have been moving in sync with Bitcoin in recent weeks.

This has primarily contributed to the prolonged consolidation phase seen in recent times, and it is a strong possibility that ETH will struggle to gain any momentum independent of Bitcoin’s in the near-term.

That being said, one analyst is pointing towards the potential Phase 0 rollout of ETH 2.0 as a catalyst for upside – which could be starting within a week.

He notes that although ETH doesn’t look quite as technically bullish as Bitcoin at the moment, news surrounding the start of the ETH 2.0 rollout could open the gates for a move towards $700 in the near-term.

Ethereum Consolidates Alongside Bitcoin as Volume Ramps Up

At the time of writing, Ethereum is trading down just over 2% at its current price of $369. This is around the price at which it has been trading throughout the past few days.

Although it has been sliding lower ever since it lost its footing above $380, its recent descent has come about in the form of a slow grind lower.

This has allowed Bitcoin to outperform it, and this trend may persist until trading volume surges higher.

While sharing his thoughts on Ethereum, one analyst noted that the imminent rollout of Phase 0 of ETH 2.0 could be just what it needs to rally higher.

“ETH for those asking: $700 likely isn’t too far off. Eth 2.0 Phase 0 within a week could be one of many bullish catalysts although I just don’t think it looks as bullish as BTC. I refuse to not have it in my portfolio. It is the lifeline of alts, and has massive changes ahead.” 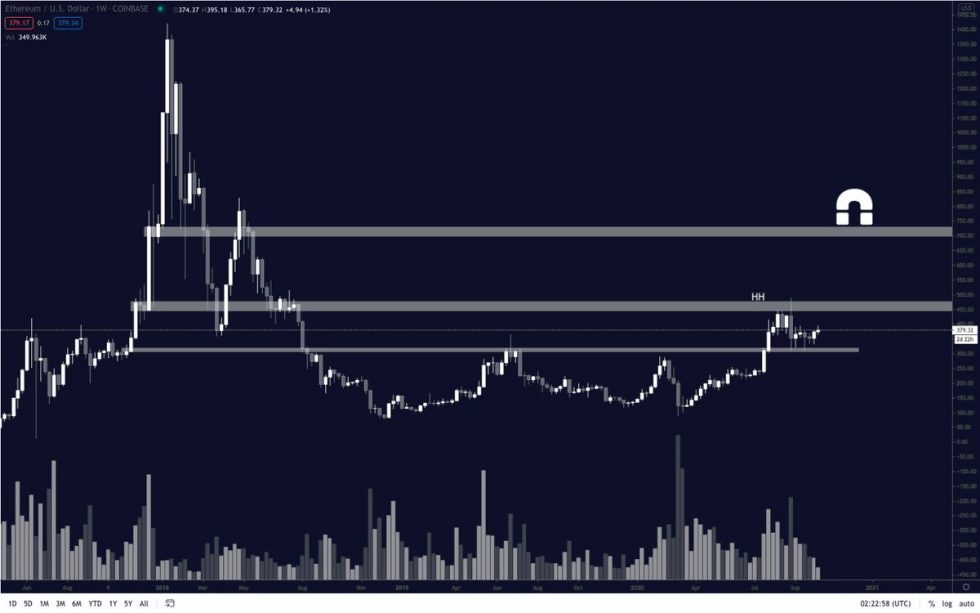 The coming few days should provide insights into when the exact start of the Ethereum 2.0 Phase 0 rollout is and whether or not this will be a bullish catalyst.