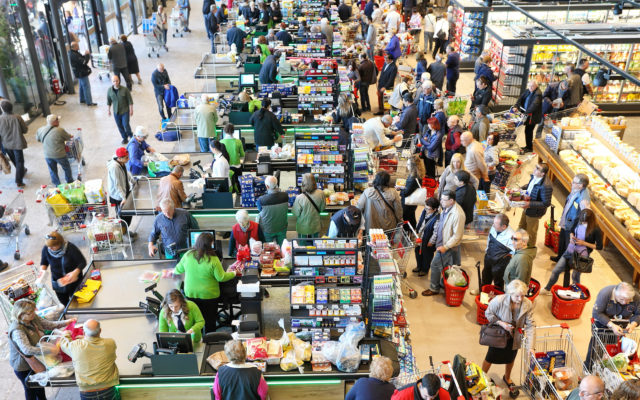 Yesterday, the active supply of Bitcoin on the market was at its lowest in months — suggesting consistent demand for BTC ahead of the halving.

The next Bitcoin halving is expected to occur on the 18th of May, 2020 — marking 4 years since the last halving event.
This could explain why the active supply of Bitcoin dropped by 3.3% yesterday: people are buying more of the cryptocurrency ahead of the halving event which they expect to increase the value of Bitcoin.
What Is A Bitcoin Halving Event?
Bitcoin halving is an ‘event’ that was coded into the Bitcoin protocol whereby the miners, who receive an amount of Bitcoin for verifying a block of transactions, receive 50% less for their work than before the event.
Halving was designed to limit the supply of Bitcoins on the market, and steadily control inflation of the cryptocurrency.
Why Might People Be Buying Before An Event?
Since halving limits the acceleration of future Bitcoins in the network provided that demand stays the same or increases, the price of Bitcoin will rise since supply is lower than demand.
Before an event, traders and asset managers alike are likely to go long on Bitcoin if they expect this price increase. Moreover, people who believe in the value of the coin are likely to buy up and hoard.
Mining events: Guaranteed Profit For Buyers?
Mining events do not certify that people will make a profit from halving events — despite the positive results from past halving events.
In-fact there are many different theories about how greater halving will affect the market.
Some, such as Marco Streng, CEO of Genesis Mining, believe that halving weakens the incentive for miners to verify transactions as miners are competing with more-and-more miners for less profit. As a result, after a mining event, you could see many mining companies drop out of the race and the centralization of mining — putting a great deal of power in the hands of select mining companies.
This itself could mean a loss of support and price drop for Bitcoin which was initially valued so highly because of its potential as a decentralized currency.
The Difference Between Long & Short Term
All-in-all, the immediate profitability of a mining event largely depends on how much demand there is for Bitcoin immediately before the event.
If the popular expectation is that the halving event will increase demand and thus raise prices — this will push up demand for Bitcoin and actually, raise the price.
Yesterday’s negative supply shock seems to suggest that this expectation is present and that investors could see big returns after the May Halving event — provided that there are no positive supply shocks on the horizon (people selling en-masse due to a negative event).
And as for the long run, there are far too many possible factors such as government regulation and new, alternative crypto projects and institutional investment which could affect Bitcoin’s price and profitability.
At this moment in time, it is hard to tell whether halving will have a positive or negative effect on Bitcoin’s price in the long run.
Do you think people are buying bitcoin in large numbers to benefit from the upcoming halving? Let us know your thoughts in the comments below!