The BTC/USD exchange rate began the 7-day timeframe with a decent jump – and it spent the rest of the time trading upward. That was despite the uncertainty surrounding the next US fiscal stimulus and the presidential election on November 3. Bitcoin remained the best-performing safe-haven asset after closing the week about 13 percent higher.

Another Good Start for Bitcoin

Opening Monday, BTC/USD rose 0.5 percent to trade further above $13,000, a psychological support level that traders believe will provide a firm footing for the next bull run. 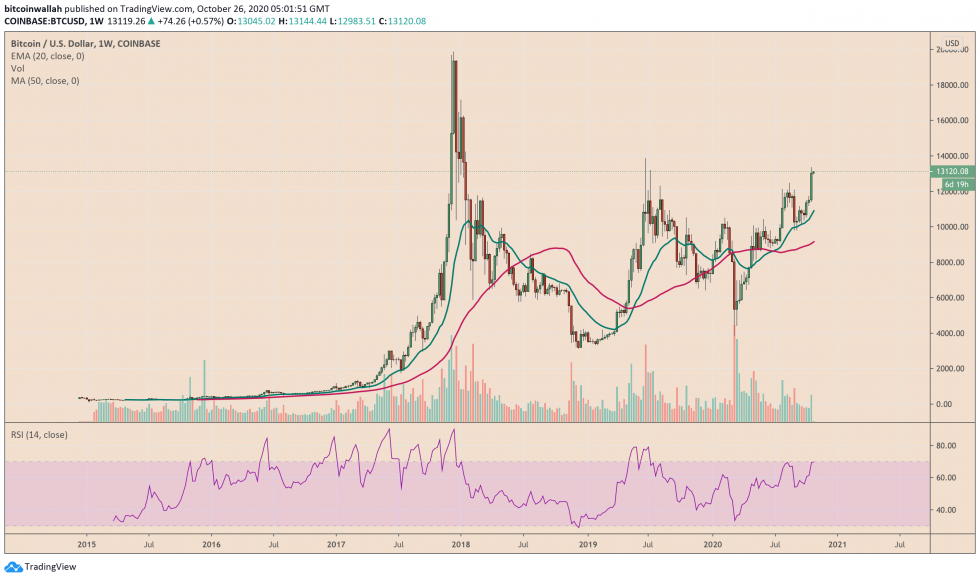 The fundamentals are so far supporting the rosy technical picture. This week is looking to be a busy one, with the US election and fiscal stimulus talks promising to influence the global market outlook, including that of Bitcoin.

Analysts expect the Democratic nominee Joe Biden to beat the sitting President Donald Trump, a Republican. They add that a Democratic majority in both the Senate and House of Representatives would pave the way for a bigger coronavirus relief package – of more than $2 trillion.

A section of economists also sees the stimulus as inevitable. So no matter who wins the election, the market should expect at least an aid worth $2 trillion.

Both the scenarios intend to leave the US dollar weaker, thereby raising demand for other safe-havens in both the local and foreign markets. Bitcoin serves as one of the hedging alternatives to investors. Therefore, the cryptocurrency’s connoisseurs see it trading upward post the US election.

Meanwhile, Bitcoin would at least hold its gains above $13,000 as significant tech players release their third-quarter earnings.

The sector has outperformed its peers largely in 2020, helped by demand for online technologies during the coronavirus-led lockdown. It now covers more than 80 percent of the total gains logged by the S&P 500 index, somewhat becoming a flagbearer of Wall Street’s impeccable performance in a recession year.

This week, the likes of Facebook, Alphabet (Google), and Apple would unveil whether or not their recent stock rallies have strong revenues as a base. Strategists note that investors would even ignore a poor financial report, given the firms’ strong growth prospects in the next 12 months.

A sustainable rally in the US stocks would reduce investors’ appetite for cash. In turn, it would mean lower selling pressure across other safe-havens, including Bitcoin.