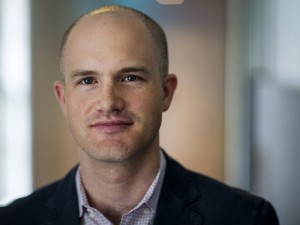 Is it possible that the crypto market expands to the point when about 80% of the world uses it? Coinbase CEO Brian Armstrong believes that blockchain will help the crypto space achieve that goal.

Crypto Market Adoption Should Surge 9,900% to Get to 5 Billion
Currently, there are about 50 million people worldwide using cryptocurrencies in one way or another, according to Armstrong.
According to a chart published by Statista, there were almost 45 million cryptocurrency wallet users as of the fourth quarter of 2019, up from 32 million in the same period of the previous year and more than double compared to the last quarter of 2017.

Elsewhere, the Bitcoin Distribution chart updated by BitInfoCharts shows that there are over 21.5 million Bitcoin wallets holding at least $1.
While it’s difficult to estimate how many crypto users are there, Armstrong’s figure is not far off the mark. However, is it possible that the 50 million figure could turn into 5 billion at some point? Brian Armstrong says yes, but he doesn’t mention when.

In conclusion: I think it's still very much up in the air which blockchain will help get crypto from ~50M users to 5B. The chain that manages to ship some of these scalability, privacy, decentralized identity, and developer tool solutions will have a big leg up.
— Brian Armstrong (@brian_armstrong) March 4, 2020

Instead, reaching the 1 billion mark will be a major achievement, which will suggest that cryptocurrencies finally went mainstream.
How Can Cryptocurrency Market Reach 1 Billion Users?
While 1 billion users is a more realistic target as of today, even that goal is not easy to achieve. Nevertheless, there are several scenarios that might lead to that:

Facebook’s Libra – Facebook has almost 2.5 billion monthly active users, and if it manages to launch its Libra stable coin, then the crypto space might reach the 1 billion mark quite easily. However, the project is facing strong regulatory opposition, with many key members of Calibra announcing their departure.
China and India – together, China and India account for about 35% of the world population. The governments of the two countries haven’t been crypto-friendly, but things are starting to change. Chinese President Xi Jinping praised blockchain at the end of last year, while India finally green-lighted crypto trading.
CBDC – Central Bank Digital Currencies (CBDC) might become the norm if central banks around the world start to endorse them. Recently, we reported that major central banks formed a think tank to analyze the potential benefits of CBDCs.

When do you think the crypto market will reach 1 billion users? Share your thoughts in the comments section!