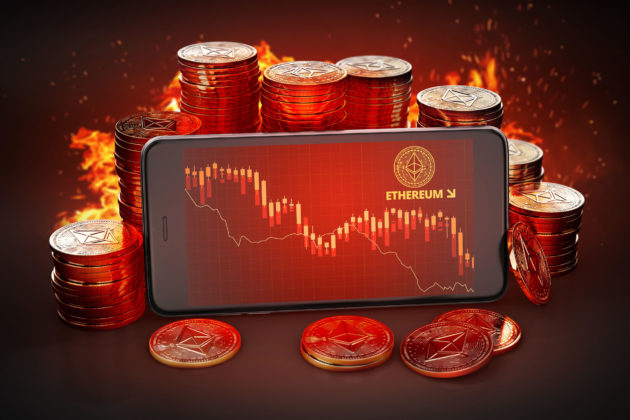 It was largely predicted that when bitcoin corrects, the altcoins will capitulate. That appears to be happening this week and Ethereum hasn’t escaped as it dumps almost 15% since the weekend.

Digital asset markets are in free fall today, since Monday over $30 billion has been dumped, with over half of that leaving the space in the past 24 hours.
From their 2020 peak above $300 billion total market cap has dumped over 15% to current levels and it looks like the pain is not over yet.
Ethereum Falling Fast
Bitcoin has corrected around 13% from its peak price this year which is a lot less than Ethereum’s losses. As predicted by Bitcoinist last week, the altcoins are capitulating as BTC corrects and fails to hold key support levels.
Since its 2020 high, ETH price has corrected 19% to current levels, hitting a low of $235 during Asian trading this morning. Over the past 24 hours the asset has dumped 11% from an intraday high of $265.
ETH price 1 hour chart – Tradingview.com
Three lower highs since mid-February have mirrored the action on bitcoin’s chart as Ethereum remains hopelessly coupled to its big brother still.
Analysts have also observed the correlation despite hopes that ETH would begin to move independently this year.
“So just understand that this is no reflection on #Ethereum and 100% tied to what $BTC does next. They have not been decoupled.”

So just understand that this is no reflection on #Ethereum and 100% tied to what $BTC does next. They have not been decoupled.
IF $BTC breaks down to $9150, then $ETH will test $225. pic.twitter.com/OLBeKW4aHz
— Satoshi Flipper (@SatoshiFlipper) February 25, 2020

At the time of writing BTC has broken down to this level and ETH is still falling so $225 could well be on the cards.
Zooming out shows a healthier picture with Ethereum prices still up 80% since the beginning of the year but this will only remain healthy if the pullback slows down. Any asset that has made such rapid gains is bound to correct harder and faster than slower moving ones and ETH has been on a roll this year.
There may have also been some liquidation from DeFi markets as the total amount of ETH locked has fallen to $2.8 million. The dollar value has also dumped below a billion but that is due to falling ETH prices.
Without pointing out the obvious, the past two months have been a mirror of the price action in June and July last year. The only negative at the moment is that overall high was lower this time around.
Bitcoin really needs to find support above its previous bottom of $6,500 in December for crypto markets to stabilize and a new rally to begin. Only then will Ethereum start to climb again.
Will ETH ever decouple from BTC? Add your thoughts below.
Source: Bitcoinist News