Bitcoin is once again trading above $11,500 after a retest of $10,000 was quickly bought up. A variety of factors are beginning to have an influence over supply and demand, and appear to be tipping the scales in favor of price appreciation.

One specific metric could be particularly crucial to the increase in value recently, and it could be causing demand to far outweigh any BTC supply available to buyers.

Satoshi Nakamoto designed Bitcoin to be the first peer-to-peer electronic form of cash, but in ten years its become so much more. He also sought to give Bitcoin a sort of collectability, and instill within it the attributes of a rare commodity.

That design element helps to give Bitcoin a scarcity and rarity that makes it similar to gold, yet due to its all-digital code, more can never be produced once the entire 21 million BTC supply is mined.

Until that happens, new coins are released at a rate or 6.25 BTC roughly every ten minutes per block generation. The current post-halving BTC inflation rate is around 900 BTC per day. 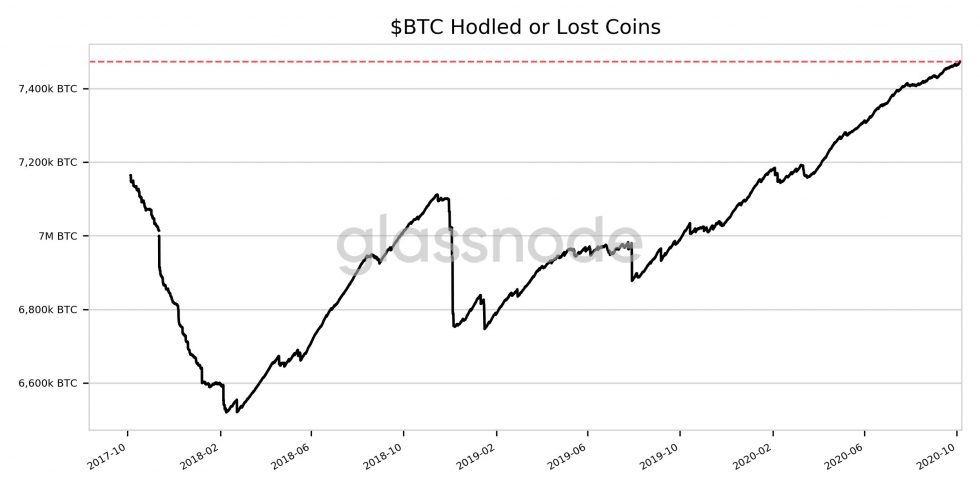 That means aside from the coins being sold on exchanges – a number that decreases by the day – only 900 BTC are being unlocked each day by miners that are at risk of being sold into the market.

Less Bitcoin sold at market rates, keeps prices growing due to supply and demand. And according to new glassnode data, the amount of BTC “lost” or “hodled” is meanwhile increasing by the day. The current data points to a BTC being held or lost at a rate of 1375 per day, resulting in outpacing the creation of new circulating coins by 385 BTC per day.

The data could very well indicate the start of a bull run brewing due to the offset of supply and demand alone. Not taking into account economic factors, the increase in money supply due to stimulus, and more, could be further fuel for the next rise.

Compared to where Bitcoin was during the last market cycle, the crypto asset is less than a month away from retesting its former all-time high. Or it should be if following the same halving-based trajectory.

The chart above acts as a roadmap for what could be the next peak and when Bitcoin gets there, according to the past market cycle alone. The next peak should arrive somewhere around October of next year, suggesting a bull run is starting now. After the next peak of roughly $300,000 per BTC, the crypto asset could fall another 80% back to roughly $50,000.

But again, there’s only a small sample size to go off of, so the leading cryptocurrency by market cap is at a ‘prove it or lose it’ moment when it comes to the stock-to-flow model and other halving-based four-year cycle theories.