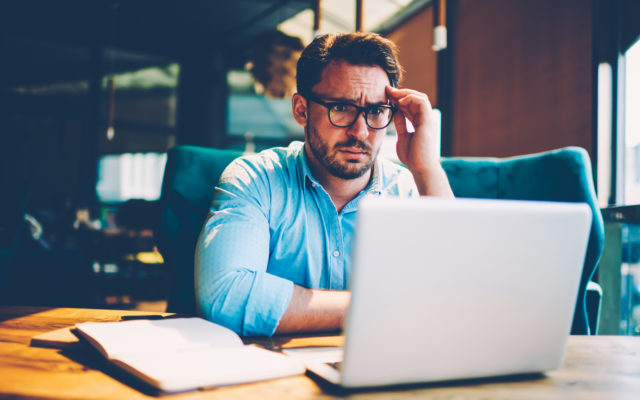 The number of Google searches for Bitcoin has decline close to pre-March levels, suggesting that the interest in the cryptocurrency could be declining despite its safe-haven potential amid the looming crisis.

Investors Worried About by Market Crash
Google Trends data shows that the interest in Bitcoin has gradually declined worldwide to previous levels. Last month, Google searches for the term “Bitcoin” skyrocketed and almost touched a 12-month high on March 13, the day after the stock markets crashed to multi-year lows. The collapse was a result of the coronavirus panic and the aggressive lockdown measures imposed by governments across all continents, including in Europe, Asia, and North America.
People were probably searching for a way to preserve their savings, given that many have lost their jobs. In the US alone, the applications for unemployment benefits surged to 6.65 million in the week ending March 28, which is a record high and an unprecedented figure. For example, previous record highs were way below 1 million.

However, despite surging interest in Bitcoin, many were probably disappointed to see that the largest cryptocurrency also crashed, losing half of its value.
While the Bitcoin price has recovered most the losses, the interest in the cryptocurrency continues to decline to pre-March levels, at least according to Google Trends.

Bitcoin Will Prove to Be a Reliable Safe Haven
However, despite the potential declining interest in the cryptocurrency at the moment, Bitcoin will likely prove itself as a safe haven soon when prices of goods and services soar amid US dollar inflation. The Fed is now pumping cash like crazy, and this portion of new money will be reflected in prices soon. Obviously, Bitcoin will also get a boost from this as well.
The upcoming halving event and the increasing interest from many new investors will support the cryptocurrency.
In fact, Bitcoin is already rallying right now, gaining over 9% over the week.
Do you think more people will invest in Bitcoin to preserve value? Share your expectations in the comments section!