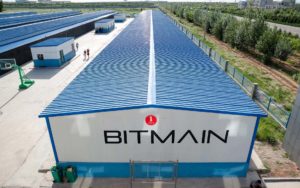 Bitmain may change the Bitcoin mining game again, with the upcoming shipments of Antminer S19, the newest model in the ASIC lineup.

Antminer Yet to Announce Shipping, Prices for New Rig Model
Antminer S19 can quickly make the previous models that powered the Bitcoin network obsolete. The latest models have unsurpassed energy efficiency, and a hashrate of up to 110 TH/s for the Pro edition. The new machine can start changing the game for BTC mining, which continues to be extremely competitive.

The new mining rig is twice as powerful as the S17 model, which reaches 55 TH/s. Currently, it is hypothetically possible to mine 1 BTC per year with roughly 4 S17 rigs. The newest model also shows how far the Bitcoin network has grown. Just one S19 machine could have replaced all the mining power back in 2013.
But the new model may lower the number of rigs needed to start mining. For now, the date to launch and ship the S19 is unknown, as well as the market price. It may take months before the new machines are integrated into mining farms.
Bitcoin Mining Continues to be Highly Competitive
Currently, shipments of the S17 model are highly active, and farms still use older models that still have mining capacity. The BTC hashrate is now consistently close to, or above 100 quintillion hashes per second. Mining has slowed down a bit, and the latest difficulty readjustment brought down the difficulty, though by just 0.38%. This is the first downward correction in difficulty since December 2019.
The launch of a new, more powerful model, is adding to the long-term bullish signs given off by BTC mining. Bitmain, which went through a catastrophic year in 2019, has not given up on launching new models and supporting the mining economy. Despite the failed IPO, Bitmain remains a leader in ASIC production, and a significant influence among mining pools.
More powerful ASIC with better energy efficiency may be needed as miners will compete for just 6.25 BTC per block. The halving, expected in less than 75 days by some counts, is expected around May 12.
The event may cause smaller miners to capitulate, especially if BTC prices slide below breakeven. With new mining rigs, larger pools may continue to reap sufficient rewards. For now, it remains to be seen whether miners capitulate, or redouble their efforts. Breakeven prices for miners range from as low as $3,500 per BTC, to above $7,000 based on higher electricity and hardware costs.
What do you make of Bitmain’s latest bitcoin mining product? Add your thoughts on it below!