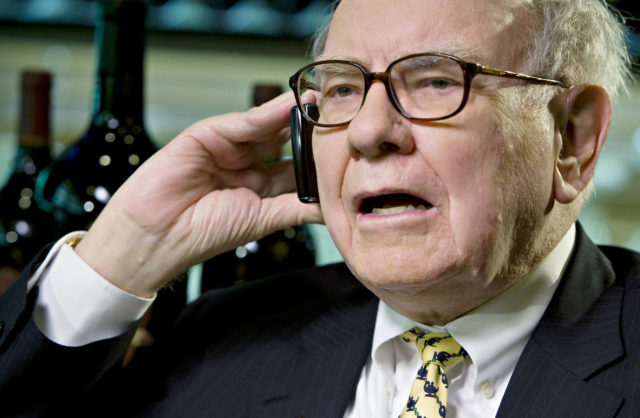 If you thought you had a bad week, take comfort from the fact that billionaire investor Warren Buffett’s was probably a lot worse. The Berkshire Hathaway CEO lost more than $28.5bn in the last seven days. Maybe now he wishes he’d kept his bitcoin from Justin Sun.

A Savage Week for All, Worse for Warren Buffett
Practically no one, not even Peter Schiff can claim to have dodged the global stock market meltdown. He was jubilant about gold recently hitting a seven-year-high on Feb 21, not missing the opportunity to lash out at Bitcoin.

But that was quickly outlived. Not even the world’s most famous safe-haven asset has escaped the coronavirus. Its price crashed back down on Feb 29, down some 2.60% at the end of last week.
It’s been brutal all across the board with the three major U.S. indexes logging their worst single-week performance since Oct 2008. The Dow Jones, Nasdaq Composite, and S&P 500 all tumbled in excess of 10% amid rising fears of the coronavirus and a global pandemic.
As the FED readies to cut interest rates, printing more money in yet another grand-scale diluting of the U.S. dollar’s worth, the market’s have rallied a little.

Cut interest rates and print money.
These are the tools of central banks.
And they’re going to abuse them at the exact moment we head into the Bitcoin halving.
Even Hollywood couldn’t write this script

Yet while this may boost investor confidence in the short-term, Bitcoiners understand the consequences of printing money at will. Here’s just one example: $100 in 1913 would only be worth about $3.87 today thanks to rising inflation.
When faced with the ever-decreasing purchasing power of the U.S. dollar and a $28.5bn loss from his top 10 investments, Buffett remains firm on his claims that cryptocurrencies have no value.
Warren Buffett and His Top 10 Investments
Buffett’s conglomerate, Berkshire Hathaway, has acquired over 50 businesses from a host of different sectors. They all serve to contribute to the investment firm’s top and bottom lines. This portfolio as of recently had surpassed the $250 billion mark in market value.
However, as of the end of trading on Friday, Feb 28, the staggering losses to Berkshire Hathaway’s investment portfolio had retraced it to a value of $212.8bn.
This decline, as pointed out by Nasdaq News, was particularly pronounced by Buffett’s top 10 investments (of which, seven shaved off more than $1bn in value in seven days).
Together, they reduced Berkshire’s investment portfolio by around $28.5 billion in just one week. Among the biggest losers were Apple, Bank of America, Kraft Heinz, and Delta Airlines.
A ‘Climate of Fear’ Is Investor’s ‘Best Friend’
At just shy of 90 years old and arguably our generation’s most successful investor, this won’t stop the old dog in his tracks. Buffett is battle-hardened, having presided over 38 stock market corrections in his time. In fact, he’s always famously said:
The best chance to deploy capital is when things are going down.
His infamous buy-and-hold thesis has served him well over the years. And it’s another reason why it’s such a shame this old-school investor’s mind is made up on Bitcoin.
As Buffett’s track record shows in the face of a stock market that continues to decline, having a long-term mindset will almost certainly yield rewards. This is something that all Bitcoin HODLers can understand.
The number-one cryptocurrency, for its part, seems to be recovering. It’s currently rebounding and looks possible to pass $9k once again today.
If predictions from the likes of Fundstrat partner and Max Keiser are correct, Buffett’s buy-and-hold iron-cast stomach would serve him well in cryptocurrency.
As Binance CEO Changpeng Zhao (CZ) points out, Bitcoin was created after the last financial crisis. Since then, it has risen by 9,000,000%.
How do you think it will do in the next financial crisis?

With the seismic losses to his investments and with an astonishing ROI like that… could it be that Buffett’s at least wondering whether he should have kept his bitcoin after all?
Do you think Warren Buffett regrets giving away his Bitcoin? Add your thoughts below!